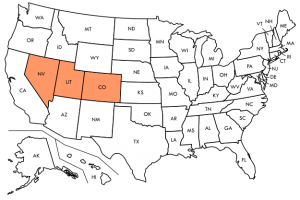 In this update we are focusing on three western states: Nevada, Utah, and Colorado. These three states are all taking action on climate change and working hard to protect their communities.

In one of his first actions, Nevada Governor Steve Sisolak issued Executive Order 2019-22 creating the NV Climate Initiative and in a press release said “For the first time in Nevada’s history, we are doubling down to address climate change head-on.” The NV Climate initiative created a State Climate Strategy, with input from local goverments, that resulted in a roadmap to reduce greenhouse gas emissions, improve resilience to climate impacts, and address climate justice. Implementation is being led by interdepartmental working groups.

One of the products of the State Climate Strategy is an excellent overview of the state-wide vulnerabilities to climate impacts. This report shows the sectors impacted by climate change including public health, water resources, environment, recreation and hospitality, and agriculture and ranching.

The Executive Order was followed by legislation that requires measurement and reporting on greenhouse gas emissions for the next 20 years and includes policies and responsibilities for achieving these emissions reductions. There is also strong support and input from the academic community in Nevada, most notably the Desert Research Institute and the University of Nevada-Reno Cooperative Extension Program.

Across the state, multiple climate impacts threaten the state’s economy and social conditions. Drought, flood, water loss, wildfires, and extreme heat influence economic activities like farming, ranching, and tourism.  As a result, significant climate legislation has been passed, such as the Resolution on Environmental & Economic Stewardship, Resolution Urging Policies to Reduce Damage from Wildfires, and the Community Renewable Energy Act.

Unfortunately, current Governor Cox does not seem as supportive of climate action. He replaced The Utah Roadmap (a climate proactive plan developed with the University of Utah) with his One Utah Roadmap which is more friendly to coal and oil interests, and less supportive of greenhouse gas reduction efforts.

Despite this, multiple universities, the Cooperative Extension, and numerous nonprofits have continued to make progress with a wide variety of programs and projects. The University of Utah has a very active Global Change & Sustainability Center, as well as holding membership in the Utah Climate Action Network, centered in the Salt Lake County area. The Utah State University Cooperative Extension program has deep roots in the state and is a very prominent actor on issues related to climate change. The Utah Rivers Council, a long standing environmental organization, produced a Climate Action Plan for the state in 2012 and a full report on climate change and the Colorado River in 2021.

One of the prominent voices on climate in Colorado is former Mayor of Denver, former Colorado Governor, and now Senator John Hickenlooper. Given the economic interests of the state, his previous support of climate action tried to walk a moderate path that kept the oil and gas industry friendly. His attitudes now appear to be shifting away from his earlier stance, saying of the oil and gas industry “They have such a long, tattered history of betraying their commitments and betraying science.”

The current Governor Jared Polis began climate work as soon as he took office in 2019 by commissioning the Greenhouse Gas Reduction Roadmap in consultation with and engagement from with Colorado’s broad network of climate active communities. An extensive suite of legislation to achieve the Roadmap’s goals followed.

In addition, the Colorado Resiliency Office offers a variety of tools, resources, and information to help empower communities to become more resilient in the face of changing conditions. Outside of government, the Rocky Mountain Institute has been a consistent voice calling for climate action on energy and greenhouse gas emissions. While located in Colorado, the Institute maintains a more national and international focus. On the local level, many groups are advocating and organizing to move a climate agenda forward: Natural Resource Ecology Lab at Colorado State University, Climate Change Initiative and Climate & Health Program at the University of Colorado, The Alliance Center, Philanthropy CO (a statewide philanthropy network that supports climate initiatives), and CO Communities for Climate Action.