Climate Action Across the Country – Texas, Oklahoma, and New Mexico 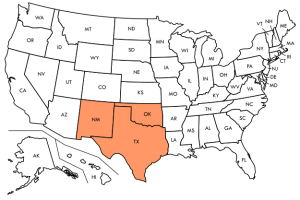 This month we are looking at three south-central states: Texas, Oklahoma, and New Mexico. Each of these states is moving forward with climate action in their own way.

Municipalities are also taking climate change seriously. Seven cities are members of Climate Mayors, including the four most populous: Dallas, Austin, Houston, and San Antonio. These communities are acting on their climate commitments and creating climate action plans. Nonprofits across Texas are also addressing climate concerns. EarthShare Texas provides networking and support for its 35 environmental nonprofits across the state. Jolt Action is a home for the Latino voice in Texas, working to educate, promote leadership, health and well-being, as well as climate justice within this important segment of Texans. Overall, Texas is making climate strides despite the strong presence of the oil and gas industry.

Oklahoma is also deeply connected to the oil and gas industries. But, similarly to Texas, it is also a very windy state with wide expanses of land. Texas and Oklahoma are two of the top three leaders in wind power generation. The wind power economy is supporting small farmers to stay on their land due to reliable income from lease agreements. It also provides education, training, and subsequent job opportunities in wind generation infrastructure. And increases in the tax base due to wind energy projects in remote communities is funding schools and county services. Clearly wind energy is an overall big win for the state. Since 2007, the Oklahoma Sustainability Network has been driving policy and programs to foster sustainable energy to support this development and much more.

When it comes to adaptation, academia takes a central role. The University of Oklahoma hosts the South Central Climate Adaptation Science Center and the Oklahoma State extension service helps the state’s agricultural community understand climate impacts and how to adapt.

Five cities across the state are taking the lead on climate action, each with their own particular focus. Altus is concerned about its disappearing water supply. Tulsa is looking to expand renewable energy and environmental justice. Edmond developed a sustainability program covering energy, water, waste, and land management. And Oklahoma City is focused on energy, the built environment, air quality and waste reduction.  In Norman, the Mayor has signed on the Paris Agreement by joining Climate Mayors so the focus is reduction of greenhouse gases.

Governor Grisham joined the US Climate Alliance as one of her early actions when elected in 2019. By 2021, the state had achieved most of the directives from her initial Executive Order, as laid out in the 2021 report of the Interagency Climate Change Task Force. The state has both mitigation and adaptation as priorities. They are working on reducing greenhouse gas emissions in industry, transportation, electricity, the built environment, and from natural and working lands. From an adaptation perspective, they are building capacity in the areas of natural and working lands, public health, emergency management, and water resources.

The work by the state government is complimented by work at the University of New Mexico, which joined the South Central Climate Adaptation Center in 2020. This consortium of universities “strives to bring together academic researchers, students, tribal leaders, and federal agencies with regional land and water management to provide decision makers with the science, tools, and information they need to address the impacts of a changing climate on natural and cultural resources.”

The people of New Mexico are are concerned about climate change. One can see their commitment to climate action with 61 different organizations active across the state. This list, maintained by 350 Santa Fe, is accompanied with a great deal more information on their Global Warming Wiki. Importantly, tribal nations are engaged in many ways in all this work across the state.