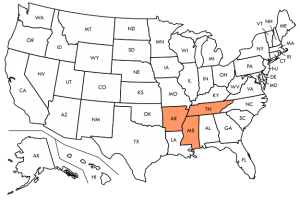 The theme this month is Mississippi River states. These states are good examples of why each state needs the ability to direct its own climate work. Arkansas, Tennessee, and Mississippi share borders but have very different circumstances that affect how climate issues are seen and addressed by both residents and policy makers.

Arkansas is making progress on clean energy, but the legislature passed Senate Bill 137 in 2021 which stops cities from banning gas use in new infrastructure. This is a measure that has been passed in numerous states that are either slow or inactive on climate. On the positive side, the legislature also passed a solar energy access bill in 2019, which did lead to growth in the industry in the state. An attempt was made in 2021 to counteract this bill but it did not move forward in either chamber. The AR Advanced Energy Association is the business voice in the state advocating for non-fossil fuel energy. The city of Fayetteville is engaged on climate mitigation with their energy action plan and their climate and energy program. Adaptation efforts in the state are being supported by a NOAA/RISA program, Southern Climate Impacts Planning Program, that provides data for a 5-state region and provides assistance to people on the ground doing planning work. The University of AR has both a sustainability program and a climate-active Cooperative Extension program. This is a remarkable amount of work considering many of the state’s leaders oppose taking action to address climate change.

Tennessee’s Governor Lee was quoted in 2019 when he took office, saying he doesn’t know what is causing climate change but that doesn’t mean the state shouldn’t be good stewards of the land. This stance is supporting climate mitigation efforts toward renewable energy and sustainability. Drive Electric TN is building a statewide charging network along the interstates and major highways. Go Green with Us is building sustainability into the state park system. Knoxville is home to the multi-state Southern Alliance for Clean Energy and Sustainable TN focuses on clean energy, water quality, and recycling. The major cities of Nashville, Memphis, and Knoxville all have climate action plans focused on energy. Overall there is a lot of action in this state on climate mitigation but very little is said or enacted regarding adaptation. Farming is one industry that is making some inroads to adapt to climate change. The TN State Agricultural Research and Education Center is defining adaptation in the state for their farming communities, and providing education on the topic. As is the case in many states we’ve looked at, the actions of mitigation and adaptation are taking place in silos and pockets isolated from each other. A united effort is not going to come from the state government in the foreseeable future so the state will have to rely on academia or nonprofits to take the lead.

Mississippi was heavily impacted by the Deepwater Horizon oil spill and has received millions in funding from that event, which is assisting climate adaptation efforts. The most recent was in 2021, with 16 new projects announced. Alongside that work, the Gulf of Mexico Climate & Resilience Community of Practice is very active. This is a multi-state initiative doing excellent work. As a collaborative with NOAA and four Gulf of Mexico Sea Grant programs, they are working to incorporate adaptation strategies into communities’ comprehensive plans. Their website connects people to tools, meetings, education programs, a green infrastructure work group, and multiple publications. The program brings together extension, outreach programs, education professionals, and community officials. As a result, Mississippi has a very extensive climate-positive program across the Gulf Coast. Inland however, there is not a lot of action. The small nonprofit 2°C Mississippi is working valiantly against the tide, providing education on climate to K-12 and university students, along with supporting climate action planning for the city of Jackson. Jackson recently recorded a heat index of 118°F so the need for proactive heat island work is acute. Even with all this work, most of the inland areas of the state are not getting the help they need.