Climate Action Across the Country – Florida, Georgia, and Alabama 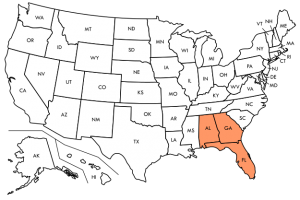 This month we are taking a closer look at the southeast. With communities feeling the impacts of increasing temperatures and sea level rise, the need for building climate resilience is growing. As places where the phrase “climate change” can be a problem, it has been remarkable to learn how much progress is being made.

In Georgia climate change is not discussed using direct terms. But that has not stopped a robust cadre of university, nonprofit organizations, and local governments from generating momentum to address the climate crisis. Instead, these efforts focus on real impacts faced by farming, forestry, and coastal communities, centering the conversations in lived experiences.

Alabama seems to be the least engaged state in the country when it comes to climate work. The legislature and Governor are deeply conservative. And the key science advisor in the state does not believe climate is impacted by human activity. Nevertheless, hazard mitigation efforts (mostly coastal) and climate education programs are helping people be prepared.

Florida is understandably very concerned about sea level rise, hurricanes, and flooding. These climate impacts are affecting the whole state and there is unanimous conviction among legislators and the Governor that action must be taken. Several bills were passed in 2021 to increase funding and build capacity for climate adaptation at the community level. Florida has a very well-organized network of 10 Regional Planning Councils. State funding and support is funneled through these councils to cities, counties, and regions for adaptation work. Additional support also comes from the Florida Climate Institute, a 10-university multi-disciplinary network.

On the other hand, climate change mitigation and reduction of greenhouse gas emissions is still dismissed in state government. In fact, laws such as SB 856 & SB 1128 are being passed to make it harder to take action at the municipal and regional level. These laws prevent construction of clean and efficient energy infrastructure and prevent local governments from banning the use of natural gas in new construction.

Despite the current political reality in Georgia’s state government, academic and nonprofit organizations are doing important climate change work. The Georgia Climate Project, a consortium of 9 universities and industry representatives, is making a concerted effort across the state.  GA Conservancy is a statewide nonprofit organization, originally launched 50 years ago with a conservation focus but has now shifted to a focus on climate.  The Cooperative Extension and Sea Grant programs work extensively on coastal adaptation work, and are leading regional forestry efforts.

The GA Municipal Association publishes a statewide newsletter that speaks openly about the threat of climate change to cities and has convened subgroup of 70 Atlanta metro cities on the issue of climate change. Atlanta has been a longtime leader in the state with their Climate Action Plan published in 2015 and and still active.  In contrast to all this important action, the legislature just passed a law preventing local governments from prohibiting the use of oil and gas systems in new construction.  This same law has passed in several states across the USA.

Alabama is a state where simply using the term “climate change” can hamper action. However, it is also a state suffering devastating losses and on-going threats from coastal flooding, sea level rise, and hurricanes. As a result, hazard mitigation and preparation are addressed actively in a State Hazard Mitigation Plan and within the Southeast CASC (Climate Adaptation Science Center).  The Nature Conservancy and the Sierra Club both have active chapters here, while Auburn University and Energy Alabama are using education to help address misinformation and develop a more informed audience for climate information.

Unfortunately, there are several significant influencers in the state, including the state climatologist and Alabama Power. While work to address climate change is muted in Alabama, there are many good people working hard on the ground to change that reality.