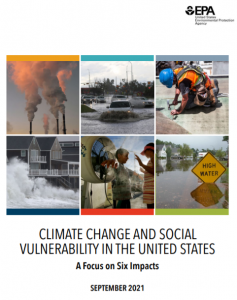 The US Environmental Protection Agency has recently released an in-depth report on how climate change disproportionally impacts the 4 most socially vulnerable groups people in our communities, as identified by the EPA.

The report reinforces a well-known factor in the field of climate resilience planning, and it  provides useful insights and evidence that you can use to drive home the importance of focusing on vulnerable populations in your own community’s climate resilience development.

“A new EPA analysis released today shows that the most severe harms from climate change fall disproportionately upon underserved communities who are least able to prepare for, and recover from, heat waves, poor air quality, flooding, and other impacts.  EPA’s analysis indicates that racial and ethnic minority communities are particularly vulnerable to the greatest impacts of climate change. Climate Change and Social Vulnerability in the United States: A Focus on Six Impact Sectors is one of the most advanced environmental justice studies to date that looks at how projected climate change impacts may be distributed across the American public.”

“The impacts of climate change that we are feeling today, from extreme heat to flooding to severe storms, are expected to get worse, and people least able to prepare and cope are disproportionately exposed,” said EPA Administrator Michael S. Regan