Climate Action Across the Country – Nebraska, Iowa, and Illinois

Our research into climate action in states across the country continues with Nebraska, Iowa, and Illinois. These 3 neighboring states share similar geography, economy, politics, and culture. Yet they have very different responses to climate change. These differences highlight the need for state-level climate leadership that can adapt and flex to the unique circumstances on the ground. 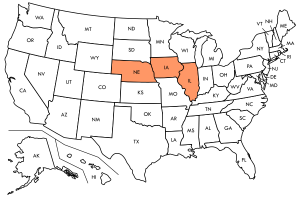 In Nebraska, the farming community is driving change, fueled by their pain from drought and other extreme weather. In Iowa, there is a growing movement to pressure the legislature to take action and  a strong Green Iowa Americorps with real boots on the ground. Illinois has been struggling with corruption in politics and their energy sector for years, but it looks like Governor Pritzker is breaking new ground with comprehensive clean energy legislation.

Nebraska is 92% farmland. The Farm Bureau, which is often considered a very conservative organization, is leading the way on climate in this state and recently voted to join the Food and Agriculture Climate Alliance. The USDA is investing $330M in climate resilience strategies and successes in South Dakota and Nebraska. And finally, the legislature has adopted a carbon capture and sequestration framework and is considering renewable energy standards. Mitigation and adaptation are both gaining real traction across the state, which has been hard hit by extreme weather.

Iowa’s legislature is not showing a lot of interest in climate action, despite repeated and concerted efforts by a group of legislators, multiple university programs (such as this one at the University of Northern IA) and over 70 civic groups organized into a lobbying body. That said, there is an Iowa Energy Plan that supports renewable energy initiatives (although it includes natural gas).  Iowa’s US Senators Grassley & Ernst are sponsoring a carbon sequestration bill that would create voluntary environmental credit markets. Americorps has a strong presence here with their “Green Iowa Americorps” program described as “…Iowa’s leader in boots on the ground energy and environmental services.” Despite a sluggish legislature, the rest of Iowa is taking significant action.

Illinois is another interesting state with unique circumstances. There is a history of corruption in this state, discussed at length in public media. Not limited to just government officials, the state’s northern monopoly energy utility, ComEd was convicted in 2020. These problems have inhibited the ability to address the state’s carbon footprint until recently. Governor Pritzker is hoping to reverse that trend. He joined the US Climate Alliance by Executive Order just after taking office in January 2019.  The legislature is poised to pass a comprehensive energy bill that aims to achieve 100% clean energy by 2050. With this passage it looks like the environmental coalition, with Gov Pritzker as their champion, will make some real headway. While they are making gains on climate mitigation, climate resilience and adaptation are not yet major elements of climate actions in the state.