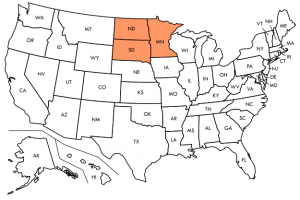 To kick off the New Year in our series looking at climate action at the state level, we are looking at 3 states that are neighbors, share many of the same climate issues and yet have different approaches to climate work: North Dakota, South Dakota, and Minnesota

The North Dakota state government has remained loyal to their coal and oil industries despite climate impacts hitting the state hard. And yet, they have also sponsored what has become a very economically viable clean energy sector. While the legislation did have to include “clean coal” to pass, the effect has resulted in the development of a prosperous wind and solar energy sector putting North Dakota on the map nationally for renewable energy generation. Governor Burgum has declared North Dakota will be carbon neutral by 2030 but his path to that goal has skeptics concerned. Carbon capture and sequestration are not just relevant to the coal and oil industries but also impact agriculture. Because of the strong focus on energy generation, which is the focus of climate change mitigation, the state has not yet put an emphasis on climate change adaptation in its communities. This reality is showing up in an interesting way: the University of North Dakota is doing research into the interface of climate science and local government, and how the language used and the discussion of the issues have shifted over the years. Change has to start somewhere, and in North Dakota one way is in learning how people talk about the issues.

South Dakota is, at least in 2022, a solidly Republican state and Governor Noem has been a vocal and ardent supporter of the former President Trump. In 2019 and 2020 a contingent of the legislature introduced bills to prevent schoolteachers from providing instruction on climate science (both bills died in committee). And yet, South Dakota gets 83% of its electricity from renewable sources (50% from hydroelectricity, 33% from wind) with continued interest and potential for further wind energy development. Renewable energy has been an economic choice for the state, which is not as well endowed with coal and oil as its northern neighbor and the fossil fuels industry has been in decline since 1982. Even though the phrase “climate change” is not freely used, there are very real and acknowledged concerns about extreme weather threats to the native grasslands. The impacts and future implications for farmers and ranchers are seen as serious. These threats, both social and economic, have brought together state and local governments, US Fish and Wildlife, academic bodies and civic organizations like The Nature Conservancy and The Audubon Society into one coalition. The SD Grasslands Coalition represents the voices of 19 different entities and is working to maintain the viability of the grasslands. They are the voice of climate adaptation in this state, even if that is not the language they use.

Minnesota is a bipartisan mix and has both supporters and deniers of climate change in positions of power throughout the state. Climate legislation in 2021 could be characterized as some effort but not enough. Governor Walz is using his Executive Order powers to move climate resilience forward in those areas where the legislature is not yet ready to go. Mitigation and energy advocacy has strong leadership in this state by MN Environmental Partnership, a member of the Midwest focused Re-Amp Network. Climate resilience in cities and towns is championed by the Minnesota GreenStep Cities program, which has 144 city members, reaching 49% of the population of the state. The sister effort, Minnesota GreenStep Tribal Nations, has 4 participating Nations. The rural communities across the state are also receiving support from the University of Minnesota and Cooperative Extension and The Nature Conservancy (TNC). TNC is a robust organization in this region and is engaged in, and fostering, multiple programs across the grasslands of North Dakota, South Dakota, and Minnesota. Overall, climate resilience action is underway across the state, but not in a coordinated or collaborative manner.