Climate Action Across the Country – Maine, Massachusetts, and Rhode Island 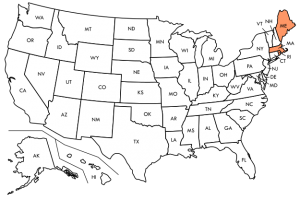 This month we are looking at the eastern seaboard. Maine, Massachusetts, and Rhode Island provide examples of effective climate action, including both mitigation and adaptation, and social equity. These states are also members of the Transportation & Climate Initiative, launched in 2010, along with 10 other eastern states.

Maine shows what can be achieved when both Governor and legislature support climate action. The state is moving forward rapidly since Governor Mills took office in 2019. Maine is nationally recognized for being the first to divest their state assets from the fossil fuels industry. Climate science is built into their legislative agenda and laws pass with bipartisan support. The state government is modeling climate responsibility in their operations, using regulatory updates to reach utilities, and providing incentives to the business community to adapt to green operations. In addition, funding has been allocated to assist municipalities in adapting to changing climate conditions. The Governor has established an Office of Policy Innovation and the Future, which includes the Community Resilience Partnership. This Partnership brings together communities, municipalities, and tribes, and provides funding, technical assistance, and shared learning to advance climate readiness.

Governor Charlie Baker has been a climate champion throughout his service as governor. In 2016 he used an executive order to establish the Integrated Climate Change Strategy for the Commonwealth, launching broad and enduring climate action in the state. The Municipal Vulnerability Preparedness Program works with towns and cities, providing grants and technical assistance. The University of MA-Amherst is deeply engaged with climate data and hosts the NE Climate Adaptation Science Center, the statewide MA Ecosystem Climate Adaptation Network, and incorporates climate work through their extension program. There are also two very effective watershed resilience programs: the Resilient Mystic Collaborative and the Blackstone Watershed Collaborative, serving as excellent examples of collective civic action. Both operate as independent organizations but actively collaborate with both state and local governments.

Rhode Island is a very climate-engaged state, with significant action by state, local, and regional governments, businesses, and civic groups. The state was the first to formally set a goal of 100% renewable electricity by 2030. The RI League of Cities & Towns stands out on the national landscape for furthering the climate agenda with training and information sessions for local leaders. The League work aligns with many other efforts at the local level including urban sustainability by the civic group Groundwork RI, the state program Resilient Rhody, the Climate Solutions Initiative at Brown University, and the Coastal Resources Center at the University of RI. The Metcalf Institute focus on climate engagement and communication is of note as climate change is extremely difficult to talk about in so many places across the USA and the globe.