Climate Action Across the Country – Delaware, Connecticut, and South Carolina 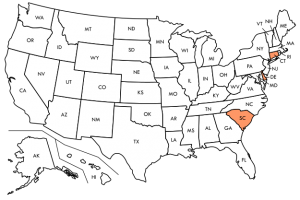 In this post we are focusing on the eastern seaboard – specifically the states of Delaware, Connecticut, and South Carolina. While these three states all share the threat of sea level rise, their actions highlight the diversity of approaches to climate change.

The Cooperative Extension program in Delaware is very active on climate issues and is collaborating with other universities, local, state, and federal agencies (including the USDA NE Climate Hub), and several nonprofits. Their efforts are focused on helping farmers and horticulturists shift to sustainable practices that can respond to changing climate conditions.

Delaware was also a founding member of the east coast Transportation & Climate Initiative in 2010. This initiative provides coordination and leadership on transportation climate issues, development of a clean energy economy, and reductions in carbon emissions across member states. In addition, the state passed a Renewable Energy Portfolio Standard which commits their utilities to procure 40% of their energy from renewables by 2035.

Outside of government, there are numerous groups doing climate focused work in Connecticut. The Institute for Resilience and Climate Adaptation (CIRCA) at the University of Connecticut has several important initiatives. First, the Resilient Connecticut initiative brings together state agencies, regional councils of government, and municipalities to build adaptation capacity and resilience. This launched after Superstorm Sandy in two coastal counties but has grown to encompass the whole state. Second, the Cooperative Extension program in their College of Agriculture, Health & Natural Resources is very active on climate. They have a number of efforts aimed at supporting communities and local decision makers, such as Adapt CT and UConn Clear.

The state also has a very active branch of the national Sustainable States Network, Sustainable CT.  This organization helps communities take action on reducing greenhouse gases, improve public health, and build community around sustainability issues. Of the 169 municipalities in Connecticut, 129 are registered in the program.

Finally, the state-established CT Green Bank provides financing for private and public energy and resilience projects. The bank uses seed funding from charges on utility bills, and generates $8 in financing opportunities for every $1 invested. It offers affordable and accessible funding to residential, commercial, industrial, institutional, and infrastructure projects. This was the first of its kind in the country when it was founded in 2011. It continues to thrive with over $2.26 billion invested in clean energy projects to date.

Climate action has been slow to gain momentum in South Carolina. The governor and state legislature are not supportive of climate action. Further, local governments in South Carolina have limited independent authority due to the home rule provisions enacted into the state constitution. Special interest groups have managed to keep control of many municipal decisions through state legislation.

The state does comply with federal mandates for hazard mitigation planning. Most recently they published an update in 2018 to the statewide Hazard Mitigation Plan which addresses a wide variety of hazards, including social vulnerability. However, there are no standards set, which results in a wide variety of effectiveness of local plans. Key to implementation of the Hazard Mitigation Plan is the SC Councils of Governments. They partner with local universities, the Municipal Association, and the Association of Counties in designing and implementing projects outlined in the plan.

At the University of South Carolina it is a different story. Climate change is on the minds and agendas of the Department of Geography and their Carolinas Integrated Sciences & Assessments Team (CISA). This is an interdisciplinary team conducting applied research for water, health, and coastal management decision making. CISA is a collaborative effort bridging federal agencies, state and local offices, and NGOs.

As the second most populous city, Columbia is a bright star on the climate horizon in this state. Their climate work began in 2006 with the Climate Protection Action Campaign. In 2017, they received a 3 star rating for their work from the STAR Community Rating System developed by the Urban Sustainability Directors Network. Columbia has also made strong commitments via the We Are Still In program. They continue to work on, and toward, their climate commitments through projects, change recommendations, and education programming. In 2022 the city hosted a conference bringing local and regional entities together: Climate Ready Columbia (note this conference is not related to the Geos Institute Climate Ready America program).