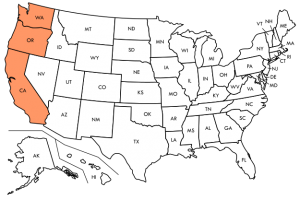 This month we are looking at the western states of California, Oregon, and Washington. All are generally progressive states and have embraced climate change both socially and legislatively with policy, funding, and political will. Despite working on climate issues for many years, there is more to do. Fortunately all three are positioned to make real headway.

California is making a massive investment in climate resilience. The recently passed budget includes $3.69 billion General Fund over three years to support investments that address the state’s multi-faceted climate risks. These funds will build community resilience and capacity where resources are most needed. Investments will support multi-benefit and nature-based solutions, which includes funding to support climate change impacts on fish and wildlife, habitat restoration, and activities that accelerate climate smart management of California’s natural and working lands. Funds are also included to address the impacts of extreme heat, build ocean and coastal resilience, and support California’s fifth climate assessment. These funds are in addition to funds being invested specifically to address drought and wildfire in California.

California has been proactive on climate since the Global Warming Solutions Act passed in 2006. In 2020-21, spurred by the catastrophic wildfires, Governor Newsom issued Executive Order N-82-20 to accelerate climate action. In addition, SB 246 – the Climate Change Adaptation Act – was passed. This act created the Integrated Climate Adaptation & Resiliency Program to implement statewide adaptation programs. This legislation brings greater resources and reach to the already existing Cool California program (a one-stop shop for local governments and schools to understand their carbon footprint, find climate policy, and access resources) and the Small Business Resiliency Toolkit.

In addition, the University of CA system has many departments on different campuses committed to climate: research, literacy, policy input, agriculture, and environmental justice. California’s biggest challenge at this point is to coordinate all the different efforts so they are collaborative and mutually effective.

Oregon’s Governor Brown and climate-concerned lawmakers have had challenges with legislators and industries who do not support carbon emission reductions. To move forward despite the resistance, Gov. Brown used Executive Order 20-04 in 2020 while continuing to pursue legislation. The sweeping order addresses carbon pollution, boosts clean fuels and electric vehicles, promotes higher efficiency for buildings and appliances, accelerates the transition to a clean utility sector, and makes climate action a top priority for state agency decision making.

The OR Dept. of Land Conservation & Development is currently working with 24 state agencies to update their 2010 Hazard Mitigation Plan with the 2021 Climate Change Adaptation Framework. This new framework will include adaptation more broadly, across the entire state. Recent efforts have focused primarily along the coast. The OR Climate Change Research Institute is a 4-university collaboration with the goal of a climate-prepared Northwest.  Oregon is also a member of the Pacific Coast Collaborative, encompassing British Columbia, WA, OR, and CA and their major cities. The Collaborative embodies a commitment to reduce GHG emissions and build a green economy.

Washington State passed what some consider to be landmark legislation in 2021 with SB 5126 – The Climate Commitment Act. This broad ranging bill caps GHG emissions but also invests in resilience and environmental justice. Nine other climate-relevant bills were also passed, setting up real forward momentum in WA, despite some counter-productive lobbying by the fossil fuel industry. The University of WA’s College of the Environment – Climate Change, WA State University’s Center for Sustaining Agriculture & Natural Resources, and Seattle University’s Center for Environmental Justice & Sustainability are all robust climate action programs.

The local community is interested and supportive of these efforts, as reflected by groups, like the WA Environmental Council who represents 21 coalitions and 41,000 people. Finally, the Association of Washington Cities and the Municipal Research and Services Centers are bringing climate insight and resources to cities across the state. Overall, Washington is taking climate very seriously and committing the resources to make a difference.